Christmas Tree Lighting in honour of the Lost Babies 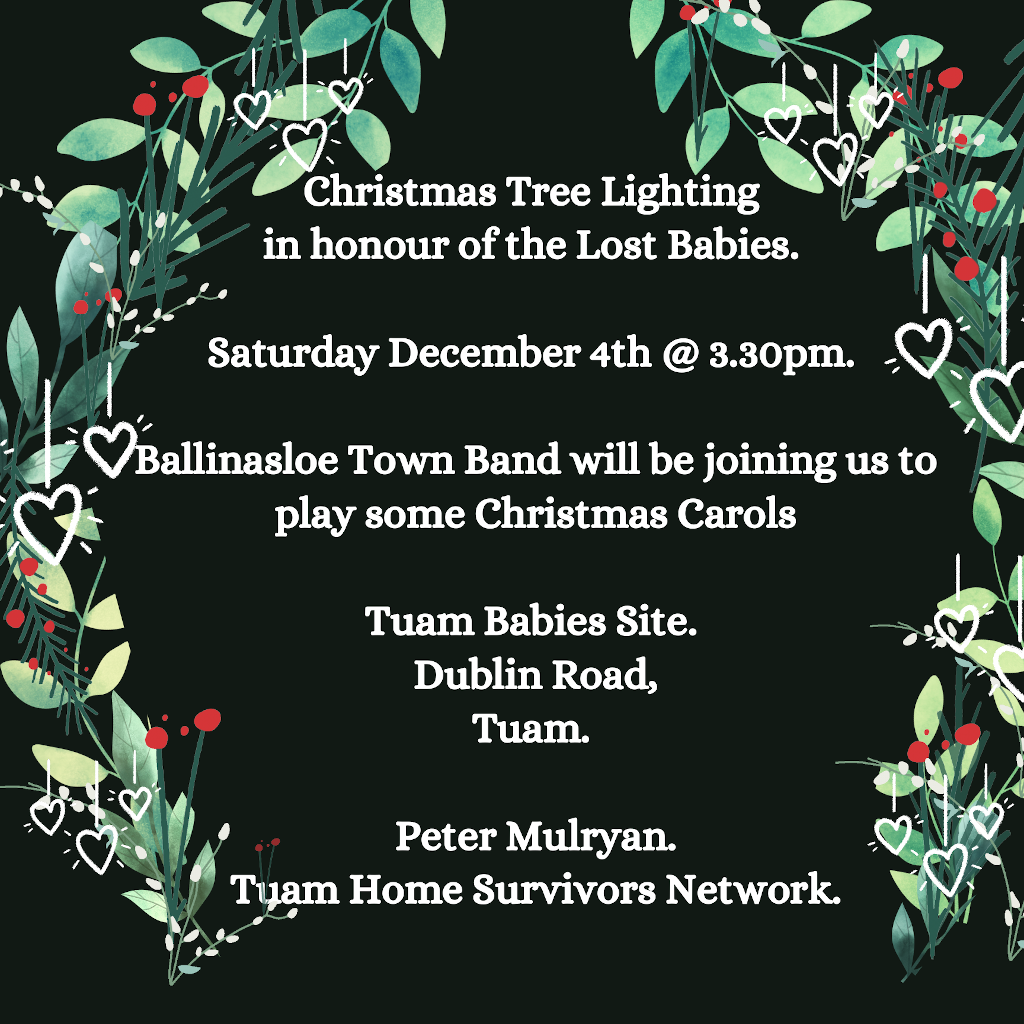 Please join us to turn on the Christmas tree lights at 3.30pm on Saturday December 4th 2021 at the Tuam Mother & Baby Institution site.

Christmas is a time for families and remembering those that are absent from our lives.  The babies/children and mothers that are in the sewage pit and also the babies that are in the grounds of the Grove Hospital never got a chance to be part of a family.  Let us be their family and acknowledge them.  They have no voice only our voice. Let us stand together and reflect on those babies/children and mothers that didn’t make it through and to stand in solidarity with all survivors of all institutions who continue to be haunted by the trauma they endured.

I would very much appreciate if you could invite your friends and family. I hope that as many survivors of these institutions, their families, friends and members of the public can make it to this Christmas gathering. If anyone would like to hang a remembrance token on the Christmas they are welcome to do so.

Please remember to share our event on social media to spread the word.

Our fight for the truth

The so-called Commission of Investigation is now exposed as what we have always known it to be, a shallow dishonest exercise in suppressing the truth.

There can be no Justice without redress for survivors and that redress must be paid for by Religious Orders who have harvested enormous wealth by inflicting misery and death on the most vulnerable in our society.

There can be no Justice without an Inquest into the dead of Tuam. They died horribly and unnecessarily. They had no life as children. The State owes them the dignity of an Inquest and a Death Certificate that truly shows why they died.

There can be no more betrayals of our dead children.

Chapter by chapter we will in the coming weeks publish what we have discovered over the last almost eight years. Today we begin with “The Hidden History of Tuam”.

Our fight has not ended, it has barely begun. We have so far relied entirely on our own meagre resources. We would be grateful if even in these difficult times, you can give some small support to our campaign. We begin again today.

30/07/2018 - As the horror of Tuam has unfolded over the last four years, there has been a steady stream of denial in the form of comment which has been ill-informed, inaccurate, ignorant in the crudest sense and sometimes just ill-mannered.

The nay-sayers have included those who have come to enjoy over time, some degree of public credibility. This in some cases has led to a career posturing as a polymath with an implied indemnity for the damage their oracle-like pronouncements cause. In this green and sometimes pleasant land, it was always thus.

The following riposte is directed in part at Mr John Waters, because he chose to strut about in the public domain, in a manner that has not merely misrepresented the actuality of Tuam but is grossly offensive and hurtful to the extended Tuam family. Survivors do not have to tolerate another layer of abuse and will not.

Since the Tuam story began to circulate widely in 2014 there has been no shortage of those seeking to discredit it, to diminish the horror and even in the face of incontrovertible evidence to deny it ever happened. Many such responses, if not all, come from individuals or organisations which represent conservative Catholic thinking apparently firmly fixed in a dogma that dominated the Ireland of the first half of the twentieth century or in some cases, the era of the Spanish Inquisition.  Some of it has targeted Catherine Corless and been unpleasantly derogatory of her. One notable voice is that of Bill Donohue 'President of the Catholic League of America'. Continuing his previous dismissals of the Tuam mass grave, Donohue criticised the major story published by the New York Times, written by Dan Barry and entitled: The Lost Children of Tuam. This was published in an editorial gesture of great empathy and generosity with an eight page Special Supplement to the paper's edition of October 29th 2017.

21/02/2018 - We recognise that the Commission is restricted by the Commission of Investigaton Act 2004 and by the Terms of Reference set by the Oireachtas.

We are grateful that the Commission working  within those restraints interpreted its powers in a manner which led it to carry out a search of the Tuam site, which confirmed it as a mass grave.

If you require help in tracing family members who may have been in the Tuam Mother and Baby Home then contact us on This email address is being protected from spambots. You need JavaScript enabled to view it. and we will do our best to help you.

For all other queries, please feel free to email us on This email address is being protected from spambots. You need JavaScript enabled to view it.

Tuam Home Survivors Network consists of survivors, family members and advocates who seek to inform and obtain a factual representation of this dark period in our recent history. We seek to encourage and enable survivors and those affected, to speak and record their experiences so that we can present a true, factual first-hand testimonial based account that is accessible to all.

Our mission is to support survivors of Mother and Baby Homes by offering solidarity and friendship through a peer-supportive network to enable them to speak candidly of their experiences. Assisted by advocates, we work jointly to ensure that no survivor, regardless of length of stay or experience in such Institution is left behind – and that their place, central to the process of recognition, is guaranteed at all times.